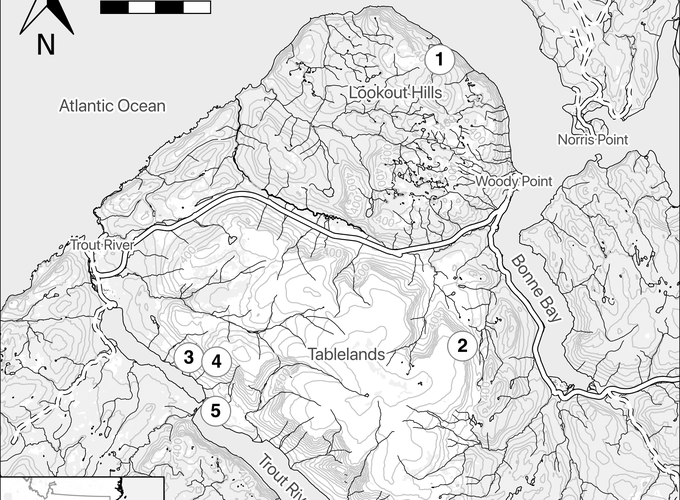 Five large gravitational slope deformation features (GSDFs) in the Lookout Mountain-Tablelands region of western Newfoundland exemplify bedrock slope instabilities in eastern Canada. The Lookout Hills GSDF (8.3 km3) on Bonne Bay (glacial trough) may be the largest GSDF in eastern Canada. It appears to be a post-glacial feature, has vertical total displacement up to 100 m, and exhibits a complex arrangement of scarps and fissures. Four other large GSDFs occur along the walls of glacial troughs in the Tablelands of Western Newfoundland with estimated volumes between 1 and 2 km3. All five features are above steep slopes and have the potential to become catastrophic massive rock slope failures. While it is tempting to link the failure in all 5 GSDFs to the removal of laterally supporting bedrock or glacier ice during the late Pleistocene, the location of these deformations may simply relate to slope steepness. Non-glacial, first order controls on the deformation include changes in the effective shear strength and opening of fractures owing to Holocene permafrost thaw may have induced failure. No discernible movement has occurred in the Tablelands GSDFs in the last 50 years. Nevertheless, the Lookout Hills GSDF requires more detailed study to determine the potential for future movement as rapid collapse into the adjacent fjord may present significant risk to coastal residents, infrastructure and marine ecosystems.