A paleolimnological archive of metal sequestration and release in the Cumberland Basin Marshes, Atlantic Canada 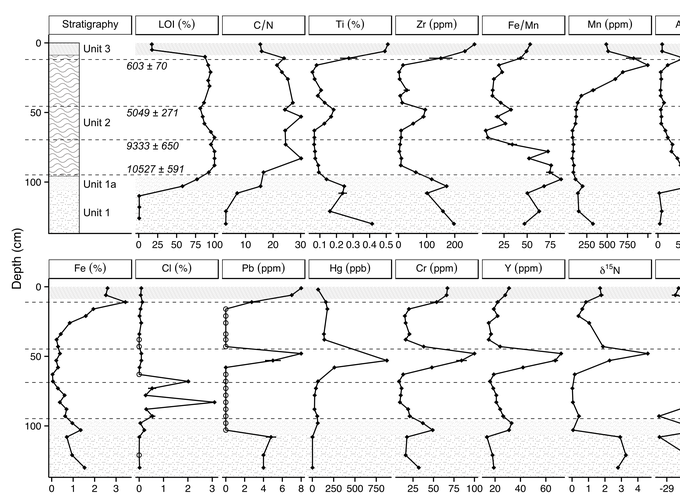 A paleolimnological archive of metal sequestration and release in the Cumberland Basin Marshes, Atlantic Canada

We used a paleolimnological approach at Long Lake, Nova Scotia, to construct a 10 500-year record of metal deposition in lakebed sediments and elucidate the influence of both natural and anthropogenic environmental changes. Aquatic sediment concentrations of mercury (Hg), arsenic (As), and chromium (Cr) in Long Lake fluctuated substantially and, during some periods, exceeded guidelines for the protection of aquatic life. Increases in lead (Pb), Hg, Cr, trace metals, and nitrogen stable isotopes (δ15N) were broadly coincident with a period of widespread drying from ca. 8000 to 4000 cal BP and were likely a consequence of regional fires. From ca. 4000 cal BP until 1700 AD, metal levels in general were low due to decreased erosion, increased precipitation, and reduced fire activity. Water level lowering and forced sediment aggradation (tiding) in the 1800s led to increases in minerogenic Pb and Cr, though fossil fuel combustion also likely contributed to total Pb concentrations. Stratigraphic proxies indicated increased inorganic sedimentation rates, and reduced autochthonous productivity were coincident with lower Hg and As concentrations in the Long Lake sediment. Our data indicate that natural phenomena (fire) can result in sediment contaminant exceedances, that most metals have multiple sources, and that both human-induced disturbance and emissions have contributed to Pb contamination in the last 200 years. In addition, wetter and generally cooler climate appeared to favour lower concentrations of contaminants in lake sediments. Although wetland sediments in the Cumberland Basin Marshes are not heavily polluted with metals, the development of constructed wetlands and the disruption of aquatic sediments have the potential to concentrate, mobilize, and increase the bioavailability of metals.