Verbifying nouns and using the pipe in ggplot2 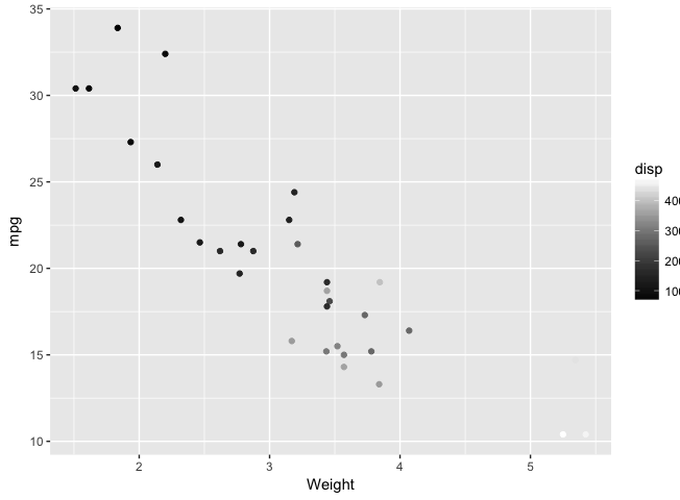 Verbifying nouns and using the pipe in ggplot2

There is a lot of talk about the ggplot2 package and the pipe. Should it be used? Some approaches, like the ggpipe package, replace many ggplot2 functions, adding the plot as the first argument so they can be used with the pipe. This ignores the fact that ggplot2 functions construct objects that can (and should) be re-used. Verbifying these noun functions to perform the task of creating the object and updating the plot object is one approach, and recently I wrote an experimental R package that implements it in just under 50 lines of code.

Constructing a plot using the ggplot2 package is like adding a bunch of things together. Right? Except the verb “add” isn’t a particularly good verb for some of the things we use the + symbol for. Consider the following example:

In the above code, + geom_point() adds a layer to the plot, + scale_colour_gradient(low = "black", high = "white") replaces (or sets) the colour scale, and + labs(x = "Weight") updates the current set of labels. In the ggverbs package, the multitude of element constructors (currently nouns) are transformed into verbs that describe what they do to the plot. This has the added benefit of using the pipe (%>%) rather than the + operator to construct a plot, without masking any functions exported by ggplot2.

The ggverbs package doesn’t actually define any functions. Instead, it uses whatever the currently installed version of ggplot2 exports, and uses a couple of regular expressions to change nouns into verbs. This has the advantage of not depending on any particular version of ggplot2, and because the functions are created on namespace load, it isn’t bothered by the user updating ggplot2, and doesn’t care if you have either package attached. The list of regexes looks something like this:

Verbifying noun functions currently takes the strategy of modifying the call to the verb function to remove the .plot argument and pass on all the others. This has the advantage of keeping the autocomplete of arguments, although there is still no way to use R’s help system with this approach. It throws 1 WARNING on the R CMD check (undocumented objects, naturally), but only consists of about 47 lines of code.